Parallel University is a research and continuing education center in spiritual science. Our areas of interest include: Extra-Sensory-Perception (ESP), Synchronicity, the nature of space/time, memory, dreams, Extraterrestrials, the Internet and Permaculture. We desire to bring about a more harmonious New Reality through better practices in community living and commerce. We conduct workshops, give parties, live performances and make creative art projects together.

Jenny Funkmeyer received a BFA from The Juilliard School (1979) and an MFA from the UCLA Film School (1989). She danced two years on Broadway, wrote and directed two feature films, managed rental properties for over twenty years and has raised two daughters; since 2007 she is married to Mr. Otis Funkmeyer.

Jenny has studied Lucid Dreaming with Stephen LaBerge, Remote Viewing with Russell Targ, Radionics with Peter Moscow, Living In The Heart meditation with Drunvalo Melchizedek and Psychokinesis “Spoon Bending” from Jack Houch. She has traveled up the Nile through the chakra system of Egyptian Temples with Isis; camped out in the middle of crop circles in Wiltshire, England; had a spiritual revelation at the Temple de la Luna in Lake Titicaca and saw a past-life flash in Norbulingka, Tibet. She has also traveled deep within through seven Ayahuasca journeys. A life-long meditator, she has developed a technique she calls 24/7 Meditation.

When called by spirit, Jenny can channel messages from the non-physical world and is well known for leading hundreds of spoonbending parties. She is also a remote viewer and psychic reader.

A vivacious reader, Jenny loves the works of Zecharia Sitchen, Graham Hancock, and Michael Newton. She also takes much joy in channeled materials such as Starseed Transmissions, the Seth books (channeled by Jane Roberts), and Abraham Hicks. Jenny is particularly fond of Bashar and counts the I AM teachings of Sri Nisargadatta Maharaj as her foremost teacher and guide.

Jenny Funkmeyer shares with you living wisdom from trials and errors of her physical and spiritual life. You will be delighted by her fearlessness, her child-like innocence, her unique point-of-view and her vital life force. Please see her Youtube Channel for great videos on the Parallel University topics! Read her biography MAGNUM OPUS and Follow her on Instragram.

Parallel University is a research and continuing education center in spiritual science. Our areas of interest include: Extra-Sensory-Perception (ESP), Synchronicity, the nature of space/time, memory, dreams, Extraterrestrials, the Internet and Permaculture. We desire to bring about a more harmonious New Reality through better practices in community living and commerce. We conduct workshops, give parties, live performances and make creative art projects together.

The Meaning of Our Logo

MERKABA "Mer" means Light, "Ka" means Spirit, "Ba" means body. The Merkaba is a crystalline energy field that surrounds our bodies. When fully activated it is the vehicle we use to transport our body and spirit from one dimension to another. 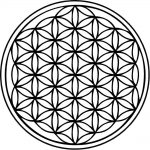 FLOWER OF LIFE is the Creation Pattern: spirit created every form of life from this formula.

2012 is the year Parallel University was established. In response to what many ancient cultures predicted to be the "End of Time", the school was founded to usher in a New Reality based on social, technological, ecological and spiritual harmony.

The Meaning of Our Logo

PARALLEL UNIVERSITY a parallel universe is an alternate reality; Parallel University is a school of spiritual science for adults. Students learn the techniques necessary to enter the parallel realities of their highest desires.

WINGS OF CREATION are a symbol of Isis from ancient Egyptian art. They are used here as a reminder of your power to create a life of ease, joy and love.

You Are the Beloved Child of the Universe